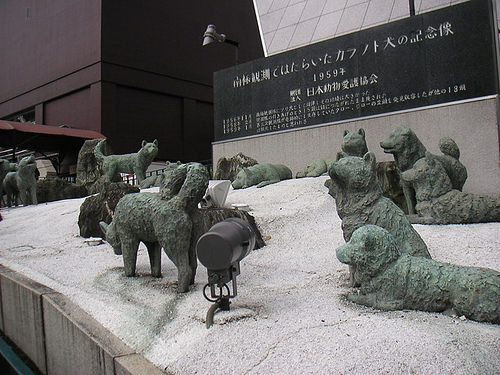 This breed dog's claim to fame came from the ill-fated 1958 Japanese research expedition to Antarctica, which made an emergency evacuation and was forced to leave behind 15 sled dogs. The researchers believed that a relief team would arrive within a few days, so they left the dogs chained up outside with a small supply of food; however, the weather turned bad and the team never made it to the outpost.

Incredibly, nearly one year later, a new expedition arrived and discovered that two of the dogs, "Taro" and "Jiro", had survived and they became instant heroes. Taro returned to Sapporo, Japan and lived at Hokkaido University until his death in 1970, after which he was stuffed and put on display at the university's museum. Jiro died in Antarctica in 1960 of natural causes and the remains are located at the National Science Museum of Japan in Ueno Park.

The breed spiked in popularity upon the release of the 1983 film, Nankyoku Monogatari, about Taro and Jiro. A second 2006 film, Eight Below, provided a fictional version of the occurrence, but did not reference the breed. Instead, the film features only eight dogs: two Alaskan Malamutes and six Siberian Huskies.
[wikipedia]