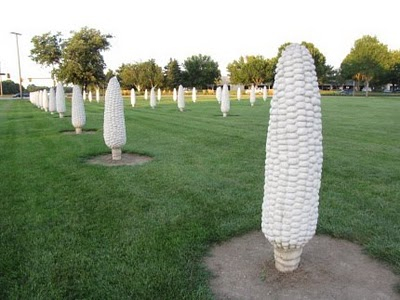 Cornhenge is a slang reference to a publicly funded art installation in the city of Dublin, Ohio. The installation, officially named Field of Corn (with Osage Orange Trees), consists of 109 concrete ears of corn positioned in rows and standing upright in a grassy field.

At one end of the field are two rows of Osage-orange trees, one pre-existing and the other planted for the project.

Sculpted by Malcolm Cochran and with landscaping by Stephen Drown and James Hiss, the field of corn was commissioned by the Dublin Arts Council and completed in 1994.
[wikipedia]