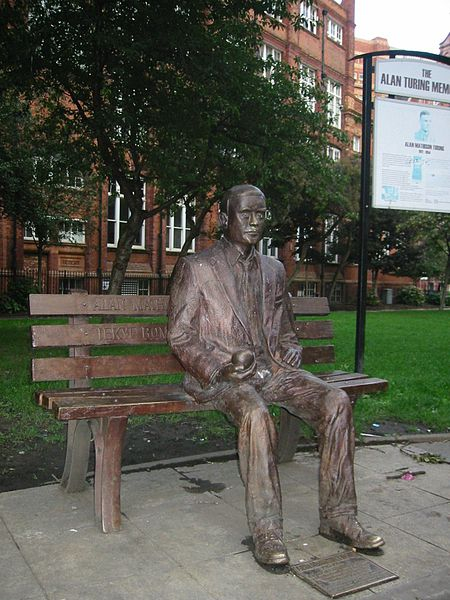 A statue of Turing was unveiled in Manchester on 23 June 2001. It is in Sackville Park, between the University of Manchester building on Whitworth Street and the Canal Street gay village.

He is holding the forbidden fruit, the apple.

The memorial statue, depicts the "father of Computer Science" sitting on a bench at a central position in the park. The statue was unveiled on Turing's birthday.

Turing is shown holding an apple?a symbol classically used to represent forbidden love, the object that inspired Isaac Newton's theory of gravitation, and the means of Turing's own death. The cast bronze bench carries in relief the text 'Alan Mathison Turing 1912?1954', and the motto 'Founder of Computer Science' as it would appear if encoded by an Enigma machine: 'IEKYF ROMSI ADXUO KVKZC GUBJ'.

There is also a Bertrand Russell quotation saying 'Mathematics, rightly viewed, possesses not only truth, but supreme beauty?a beauty cold and austere, like that of sculpture.'

The sculptor buried his old Amstrad computer, which was an early popular home computer, under the plinth, as a tribute to "the godfather of all modern computers".